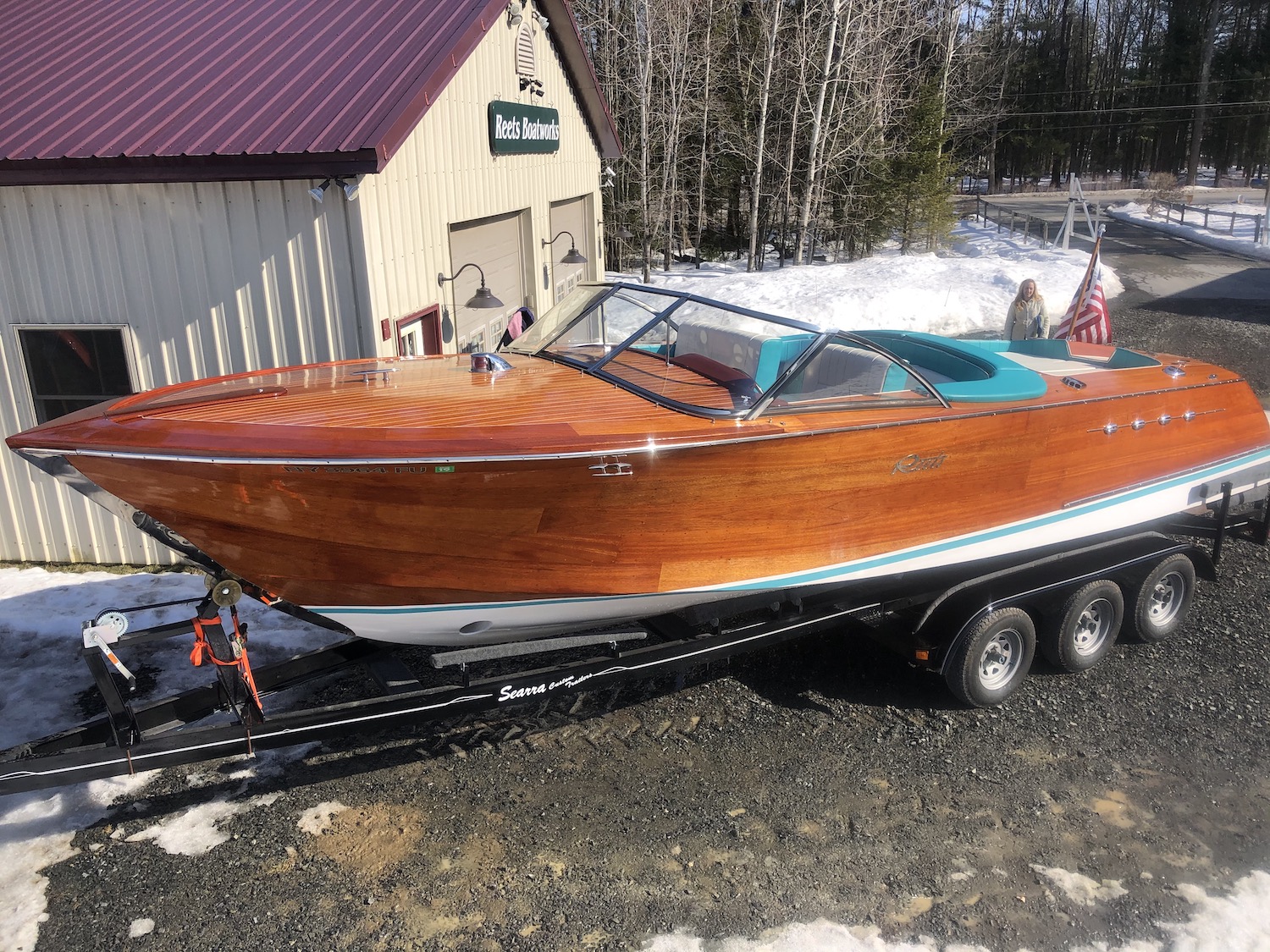 This boat was built by Reetsboat Works in NY. The lines are taken loosely from a Riva Super Aquarama and measures a little over 29'. If you want to own a Riva at half the cost and with better stronger construction this is your boat. The bottom is a triple layer cold molded bottom with each layer being 7/8" thick and is protected by Carbon Fiber Kevlar. Sides and Decks are mahogany. Engines are barely broken in. Bow Thruster and Stern Thruster make this boat easy to drive and dock!! This boat was used in Lake George NY in 2019 and stored since. This is a turn key boat with great style and incredible craftsmanship. Sits on a custom built tri axle trailer that is the same year as the boat. 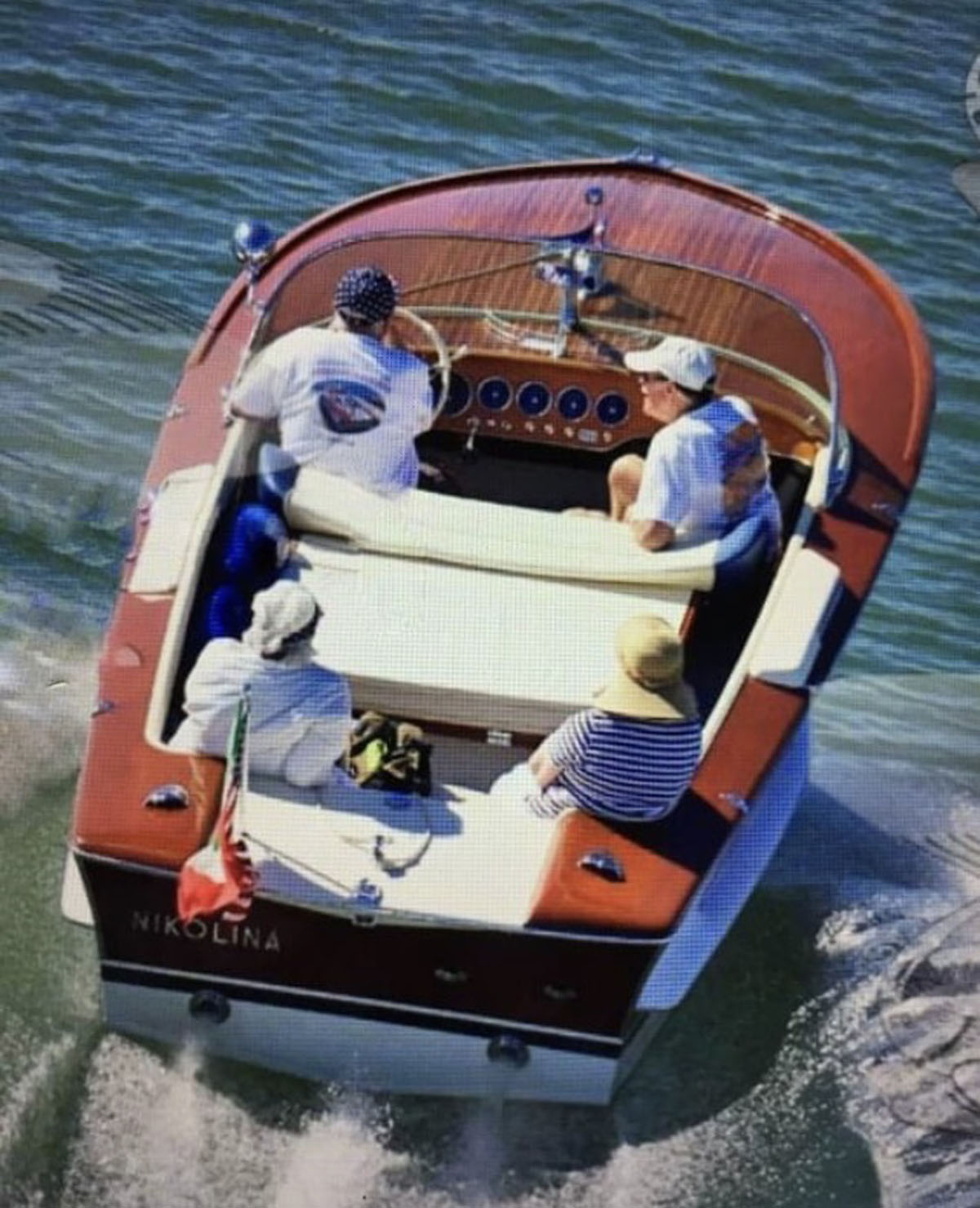 Purchased in 1969 in Monte Carlo by Patricia O'Connell Kane Matisse, who was an American and had the boat shipped to New York. Patricia's second marriage was to Pierre Matisse, son of Henri Matisse, who was a preeminent modern artist. When Maria died in 2001, the boat became part of the Estate and it sat for many years unused. The boat was purchased and fully restored. The interior is gorgeous, the gauges are rebuilt to VDO specs, rebuilt velvet drive transmission, fresh chrome all redone. The sides are original but the keel and bottom are new and have been replaced. This 1969 Riva Olympic, #25, has been completely restored and tastefully updated The engine is the original matching-number, completely rebuilt 327- 220 HP Crusader. A sample of the specific items completed during this restoration include: Enhancements with fresh varnish and new front seat upholstery, Bottom and the keel have been replaced, Chrome has been redone, Original 305 rebuilt engine, Velvet drive 71c has been rebuilt, Gauges rebuilt to the original VDO specs, New custom trailer fitted to this Olympic. All new Anchor wiring and switches with modern safety enhancements.

A proven Show Winner and a gorgeous Series 1 Riva Tritone. It has fresh sides, deck, a new bottom and new upholstery. The engines have also been rebuilt and offer strong performance. The Aperto models had the open sun pad configuration and was the impetus and the precursor for the Aquarama model. Only 17 of these Tritone Aperto models were built and only a few made it to the North American market. Boat very low hours. The boat is very correct and would score high at any boat show. Comes complete with a full mooring cover and a custom fitted tandem axel trailer.

Since new in 1989 this Riva has had only 3 owners. mechanically this Riva has only 340 hours and has always been cared for by Riva specialists. The boat received a new bottom, re-chroming, engines have been removed and the engine compartment has been repainted. The boat now also has 28 layers of varnish. The boat has always been well maintained and is in mint condition.

Essentially a new Riva Super Aquarama with a full restoration completed in 2005 by RAM in Sarnico, Italy. All wood is new but for a few frames and tow boards and was the most extensive restoration they have ever done. The sides were completely replaced with new triple lamination. Even the seat frames were rebuilt. In short, nothing was left untouched. The boat now has 454 blocks with Holly Pro-Jection fuel injection and we estimate the engines produce over 400 HP each. We saw 55 MPH on the GPS last summer at 6,200 elevation making it the fastest Riva we have seen. The engines could be changed back to the original carbureted version with a simple change of an intake manifold and carburetor. The boat is offered complete with a DHM custom trailer and a full mooring. They do not get any nicer than this one.

Owner has had this boat since 2009 and has recently restored the engine in 2013. The boat has a basic trailer but satisfactory for short haul or roll on roll off situation. Very few of these boats are found in the United States and great chance to add a Riva Super Florida to ones collection.

This wonderful Riva Olympic has been with the same owner since 1994. She was compeltely restored in Sarnico (Italian Riva town). It is a very original boat with a documented history. Hull n°29. Used during summer and garage kept during the winter months.

One of the most beautiful boats ever built, the Riva Ariston is admired among collectors and enthusiasts alike. This example has been beautifully restored and is in lovely condition. Engine recently removed and detailed, new bottom installed, and original interior cleaned. The trailer has been recently serviced and will tow the boat anywhere! This Ariston was originally delivered to Wyncote, New York and later spent its life in Lake George, NY. She is ready to show and includes her original Riva canvas cover.