Building on its legacy of grace and speed, the Ditchburn Boat Company built the Viking model based on a Bert Hawker design in the late 1920s. It had a hard chine hull and more muscular lines to appeal to a new generation of boat buyers. In 1930, Ditchburn added a shorter more agile version of the Viking, with a forward drive layout, and it became known as the Neptune model. The Neptune was a 24’ triple cockpit launch with Ditchburn’s iconic upswept foredeck - a modern design, blending elegance with performance. This boat was originally built for the Marshall family at Windermere in Muskoka and was named the “Margaretta’. It has been in the Muskokas ever since. The original engine was a 100hp straight 8 Buchanan engine. It was repowered in 1986 when the boat was completely restored by Butson Boats. It now features a water cooled 185hp V6 Crusader and can run at speeds in excess of 40mph. In addition to the new engine the restoration included a new hull, replating of all chrome hardware and new leather seats. Original features include the engraved ‘German silver’ instrument panel, a navy top and a ‘fireman’s siren’ horn. She handles well, runs smoothly at speed and has been meticulously maintained over the years.

Great running hull made by the Ditchburn Boat Company and synonymous with fine Canadian Craftsmanship. It has been in the same Family for 35 years and has been well cared for Summers and Winter during that time. The chrome and upholstery are in excellent shape and it is believed that the boat will survey

Featured in the book, "Ditchburn Boats, A Muskoka Legacy"; this Ditchburn launch has been beautifully restored and lovingly maintained. People's Choice award winner in NH ACBS. 80% original wood above the waterline, all original cast aluminum and nickel plated hardware. Bottom, keel, and stringers have been replaced. The Buchanan Junior-4 engine has been rebuilt, starter and generator recently redone. She is a great runner and ready to enjoy! 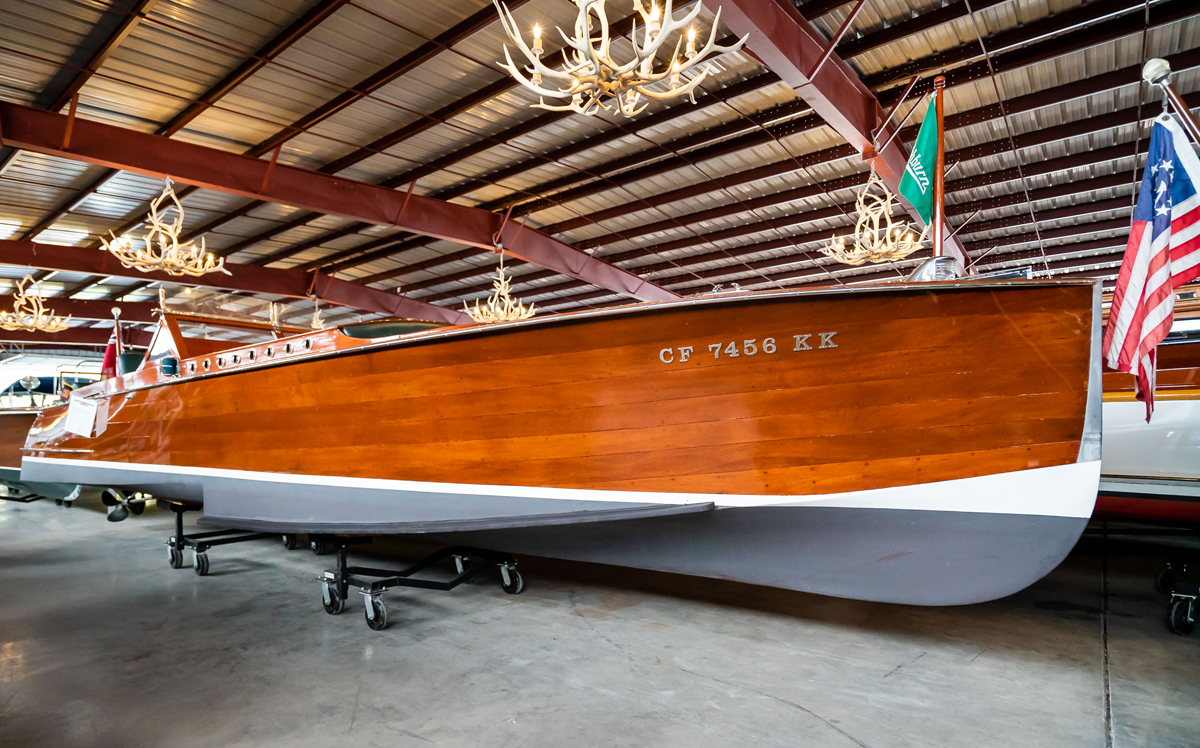 The Viking is regarded as one of the most spectacular boats to come out of Herb Ditchburn's factory. Fine Canadian craftsmanship, astute attention to detail, and a design spawned from the success of Ditchburn's trophy fleet of Rainbow raceboats. Only 7 Ditchburn Vikings exist today and it is very rare for one to become available for sale. This example bears hull #5 and was originally purchased by the Toronto Harbor Police as a high speed pursuit vessel. She was factory equipped with a fire suppression system safety system and fireproof panels lining the engine compartment. Her original Kermath engine has been restored and is sold with the boat. She currently sports modern power. The boat was saved and restored on the West coast, but now resides in her original home of Muskoka.

"Glenelda II" is a very unique, Art Deco inspired day-boat built by Ditchburn Boats in 1935. At 37 feet in length, she is a manageable size and offers seating for up to 21 passengers. She has been repowered with twin Mercruiser 454cid engines. Her dynamic design is reminiscent of the Chrysler Airflo and the Streamliner trains of the era. At the time of restoration, her foredeck was removed and additional seating was installed, adding a great deal of entertaining potential. "Glenelda II" is an intriguing craft and is ready for a new custodian to give her some attention and get her back in the water.

This 36 foot Ditchburn long deck launch is elegant and exemplary of Canadian craftsmanship. Beautiful mahogany construction, egg crate "Muskoka" floors, supple leather upholstery, and strict attention to detail. She has been repowered with a reliable Chrysler Royal engine, upgraded to a 12V system. At 36 feet in length, she stable, roomy, and absolustely elegant as she cuts through the calm water. The Chrysler Royal straight 8 engine is regarded as one of the smoothest running engines of its era and should provide years of reliable service.

This truly could be the last of its kind, a lapstrake built by Ditchburn. The boat has undergone a complete restoration over a period of three years to restore it to its original showroom condition. This triple cockpit runabout has had all of its mahogany hull and deck planking replaced using traditional brass clench nails, however we have made two modern day additions by treating all bottom planking with CPES and using 5200 on all laps. Every single detail truly was addressed and well documented, from remanufacturing missing parts, rechroming all original hardware, custom upholstery, electrical, fuel systems. This unique Ditchburn is powered by a Buchanan Flathead 6 and offered with a custom single axle trailer. No pictures or words can do her justice, truly must be seen to appreciate.

The name Ditchburn is synonymous with some of the finest pleasure craft ever made. This family had boatbuilding in their blood and have earned their pace in marine boatbuilding. The company was a prolific builder and known for their excellent craftsmanship but the company suffered during the depression and never returned to their former selves. This 1925 Long Deck Launch has the original 75 HP Kermath engine and maintains all of it's original. The hardware and upholstery are in great shape as are the gauges. The hull, bottom, sides, ribs, frames and decks are also solid and sound with very good integrity. The boat has always been in the fresh waters of the Muskoka Lakes and is ready for a new owner to continue her stewardship.